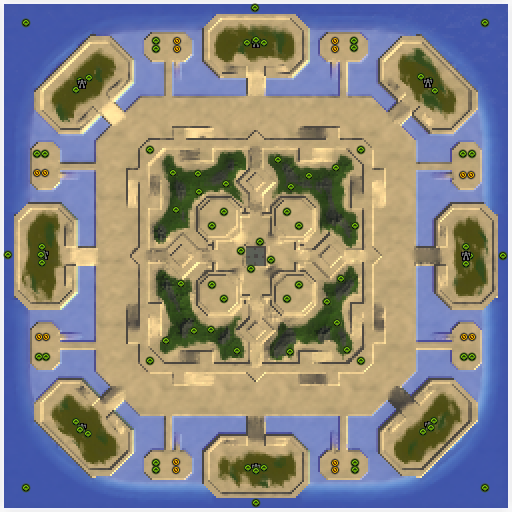 Описание: Note: Enemy Civilians required for proper function, otherwise pick the regular Guardian’s Trail version!
Welcome to Guardian’s Trail. A secluded UEF long ranged artillery support facility. Teleported into one of its many outer gardens, you will be faced with a decision: Will you fight your opponents and take the mass rich inner gardens for yourself? Or will you challenge the fortress’s defences in order to gain the ultimate prize at its heart: An Indestructible Mavor.

Koth Edition: Added extensive scripting to turn the map into a Pseudo King of the Hill. Mavor can no longer be destroyed and is far easier to take.
v0002: Added an additional Hydro to edge docks to make them more inviting early game. Added a Mex each for each edge center base (in the water). Tweaked scripting so the message is smaller and comes in two pieces, thereby being more readable. Tweaked level of terrain in center bastions to make air travel less glitchy. Changed slopes of bridge keeps to make them smaller, therby ensuring big things have an easier time fitting through the bridge. Added 2 Neutral T2 Turrets to each Bastion.
v0003 Fixed a situation where the Mavor would fail to reset upon a user’s death, causing it to become innoperable.
v0004 Tripled norush radius has it had a pitiful amount before for people that used it.
v0005 Raised bastion hills a bit and deformed terrain such as to fix an exploit in which it allowed an engineer to build a factory from far below without requiring a transport. Smoothed out terrain edges in the water edges to decrease the possibility of units getting stuck. Added a red outline to the valid area T3 Generator to make it slightly more visually obvious.
v0006 Fixed a bug that caused the Mavor to be impossible to retake by the same person after losing it. Replaced bridge T2 radars with T2 Power gens as they lost their purpose when the bastions gained easy to grab T3 Omni
v0007 Added land type data (It probably helps with graphics or something). Added 4 T1 Radars to mid, hopefully this should make the civies a bit more trigger happy.
v0008 Removed Naval AI markers to see if the AI focuses more on ground/air action, as the AI doesn’t really know a solid naval strategy on the map.
v0009 Fixed bad slopes again.